Talk with Ilona Otto about connection between Climate Change and Wealth 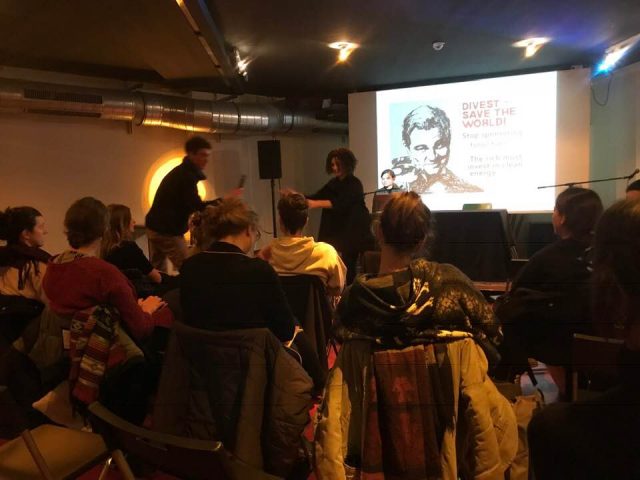 Ilona Otto’s lectured proved to be touching the forefront of current political events.

The yellow vest movement’s demonstrations in France are indeed an illustration of the rich attempting to pass the burden of fighting climate change over to the poor.

What’s truly interesting though, is that however much you take from the poor, without changes in structure there’s no room for change, and structure can only be changed by the government. By the rich. They yellow vests  in France say: “Build railroads, make public transportation free, tax corporations, not the poor!”.

And statistics speak in favor of their opinion, not the government’s.

A study by PIK [Potsdam Institute for Climate Impact Research] shows that there is a direct correlation between the inequality in our society and which measures of countering climate change are efficient and which aren’t.

Together with the children from the Karuna project, Humboldt University students, social workers and everyone interested we asked questions and looked for answers.

Lea Irmish - project Curator of What is Wealth book.

Ilona M. Otto is a senior researcher at the Potsdam Institute for Climate Impact Research (PIK).

Frank is Ph.D in philosophy and involved in activism and wide educational initiatives for many years.

Nika is an author who is working on several publishing and art projects, including A4kids.org, an open-source platform experimenting with new educational formats, co-created with her late husband David Graeber, an anthropologist and activist.

From childhood, we read stories about rich and poor, about kings and commoners, about enormous treasures and adventurers.
But what is “Wealth”?

We are working on a series of postcards that could be sent to people to convince them to change their choices.

Probably for each person it is essential to compare her or his personal stories with public perceptions about important issues, such as "What is wealth?", " What is poverty?" and "Where do they come from?"

We started drawing portraits of each other. Gradually, more and more appear ...

What is it? Who we are and how to join us?

How I integrated the kids’ input

Talks and presentation:”What is wealth?”

The opening of the exhibition/talk "What is wealth?" - the result of the work of A4 Kids Lab Karuna Berlin

What did the ancient Greeks think about debt and freedom?

Children discuss the famous dialogue of the Nobel Laureate poet and translator Joseph Brodsky with a judge of the district Leningrad court, who condemned him to five years of forced labor and expulsion from the city.